A HUGE congrats to Tramanh and Tu for getting the most # of votes!  And congrats to the other contestants as well!  Everyone had such personal and unique stories, we wish we could give out sessions to everyone.  Unfortunately, we would be broke and being broke would be bad business.  🙂

Thanks again to everyone who visited our site and voted.  Congrats again to Tramanh and Tu!  Be on the lookout for an email from us.  (The other contestants should be on the look out as well!!) 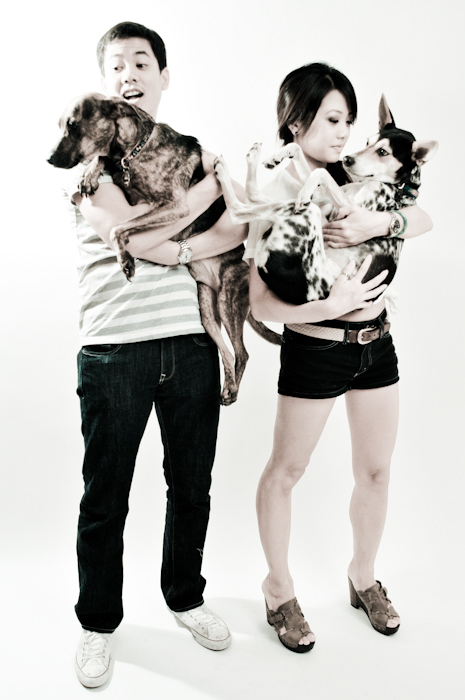 Our next contest will be announced soon.  And, trust us, it will be funnn!

(And here’s their story for those who missed it.)

When I was 11 years old my mom received baby chickens as a gift, which were cute until they grew up and became noisy teenage chicken poop factories. They were the worst pets ever.

8th grade was the year I first laid eyes on her. It wasn’t in person though. It was while combing through my yearbook in the lunchroom of school looking for pictures of hot girls. I would see her in the halls and swoon silently as she passed by, and did what most 13 year-olds do when they get near girls they like, run away swiftly. She doesn’t even see me. I hate you. Cry.

Fast forward to high school. Come to find out our mothers are family friends, and one weekend she arrives at my house for a lunch gathering with her family. Totally unprepared for this chance encounter and cursing the Vietnamese community for being so closely knit that everyone HAS to know everyone else in the city, total awkwardness ensues. I ask her if she likes the movie playing on the television, which happens to be one of my favorite childhood movies. She gives me a weird look and says no, then resumes chatting with her siblings. Who doesn’t like GOONIES? I hate you.

The next time I ran into her was at a happy hour during college when drinking raspberry 151 shots were still in style. The encounter was brief. Hey, how are you, how’s school, sorry gotta go my friend is barfing, see you later. She left while I drowned myself with Raspberry 151. Love is stupid. Time to barf.

She moves to California for law-school, so we keep in touch with Xanga, Myspace, Facebook, and AIM. Thank you modern technology. By the time she moves back to Houston after graduation we’re all grown up now and have jobs. Her downtown office happens to be across the street from mine. We start hanging out at happy hours together because we’re bored and its rare to find someone else that will drink on a weekday with you. I stole her tater-tots while she was passed out drunk one night in the booth at House of Pies. She likes to bake and one day brings me a bag of homemade lemon cookies. They were the best cookies I’ve ever had in my entire life. What is happening. We sign our first apartment lease agreement together. We cook our first meatloaf together. We adopt 2 dogs from the local shelter. We close on our first house together. I kneel in a hot crowded field during a concert in front of hundreds of people while Cut Copy plays Hearts On Fire and ask her to marry me and she says yes, then we dance.

One day we’re driving to the grocery store and she randomly tells me about the time she had 2 baby chicks as pets until her mom gave them away to some random family while I gasp. All this time she never knew who took them or what happened to them. I tell her that my uncle cooked the chickens. Destiny.